By Nnabugwu Chinazaekpere, your anchor and host. 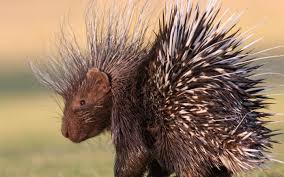 Dear Kingdom-minded, Success Driven Friends and Partners. I welcome you again to your Weekend On-line Platform “Naza’s Corner”, dedicated for Teens and Kids for converting Peer Pressure to Peer Learning.
Please sit back, read and enjoy facts about the Porcupine. Remember to comment after reading.
The Porcupine is the prickliest of rodents, though its Latin name means “Quill Pig.” There are about two dozen Porcupine species, and all boast a coat of needle-like quills to give predators a sharp reminder that this animal is no easy meal. Some quills, like those of Africa’s crested Porcupine, are nearly a foot, that is, 30 centimeters long.
Porcupine Quills
Porcupines have soft hair, but on their back, sides, and tail, it is usually mixed with sharp quills. These quills typically lie flat until a Porcupine is threatened, then leap to attention as a persuasive deterrent. Porcupines cannot shoot them at predators as once thought, but the quills do detach easily when touched.
Many animals come away from a Porcupine encounter with quills protruding from their own snouts or bodies. Quills have sharp tips and overlapping scales or barbs that make them difficult to remove once they are stuck in another animal’s skin. Porcupines grow new quills to replace the ones they lose.
Behavior and Habitat
The Porcupines found in North and South America are good climbers and spend much of their time in trees. Some even have prehensile (gripping) tails to aid in climbing. The North American Porcupine is the only species that live in the U.S. and Canada, and is the largest of all Porcupines. A single animal may have 30,000 or more quills. North American porcupines use their large front teeth to satisfy a healthy appetite for wood. They eat natural bark and stems, and have been known to invade campgrounds and chew on canoe paddles. North American Porcupines also eat fruit, leaves, and springtime buds.
Other Porcupine species live in Africa, Europe, and Asia. These animals usually live on the ground and can inhabit deserts, grasslands, and forests.
Female porcupines have between one and four young, depending on the species. Babies have soft quills at birth, which harden within a few days. Most young Porcupines are ready to live on their own at about two months of age.